“The island as classroom: The College Crusade comes to Block Island”

As published in the Block Island Times
https://www.blockislandtimes.com/article/island-classroom/52968 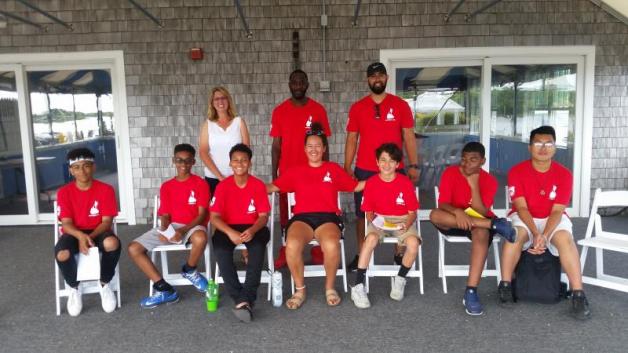 On a recent Friday morning, as kayakers paddled by, and most people went about the business of being on vacation, a group of teenagers were on the back porch of the Block Island Maritime Institute conducting what can be described as an outdoor classroom. One by one they each stood and read from a paper detailing what they called an “anchor problem,” which was designed to introduce and offer solutions on how to use and conserve Block Island’s finite natural resources. After each paper was presented, a minimum of two questions was required from those in the audience, challenging the presenter even further on how they would offer solutions to the problem they had chosen to write about.

This is not your typical summertime activity on Block Island. These kids are part of a program called The College Crusade of Rhode Island, which was created to help “underpriveledged and under-represented youth” get on a college-bound track, according to teacher Harry Moore.

The program provides these young students, who, in this class, were from Providence, Pawtucket, and Cranston, with “the extra resources to sustain a successful education,” said Moore. The students are in the fifth and sixth grades. Their presence was due to a unique partnership between BIMI and College Crusade, and is the outcome of a merger between the College Crusade and a BIMI program.

“BIMI has sponsored the Dolphin program (named for Eileen Dolphin) for over 10 years. The students that attended the Dolphin program all attended schools that served inner city populations from Rhode Island, as well as New York, New Jersey, and Massachusetts. Last year, we hosted the College Crusade for the first time for one week,” said BIMI Program Director Valerie Preler. “Through extensive talks with the College Crusade, it was decided that the BIMI program would be a good opportunity for College Crusaders and that serving only Rhode Island students made sense.”

According to Preler, BIMI Board member Jack Lynch, who oversaw the Dolphin Program, along with BIMI founder Don McCluskey and others met with College Crusade “and discussed what program changes would need to be made for the program to suit both organizations. Through these meetings it was decided that the students should have the opportunity to learn about the island’s ecology and history as well as enjoy the recreational activities uniquely suited to the island. The goal was that the experience on Block Island would help to develop students’ interdisciplinary skills such as communication, self-confidence, and leadership capacity along with learning about ecology, sustainability and overarching scientific principles. It was decided that a heavier focus on academics than originally offered with the Dolphin program would be needed. The College Crusade hired a curriculum writer who worked with BIMI to create a program that would meet Next Generation Science Standards.”

This year, the College Crusade curriculum built on the anchor problem of finding ways the island can sustain its ecosystem and biodiversity.

“Throughout the week, the activities include experiential science lessons with BIMI, as well as participation in activities provided by others on the island,” continued Preler. “The students attended bird banding with Kim Gaffett and a tour of the Block Island Historical Society, which discussed the changes to the island’s ecosystem over time. They participated in BIMI programs, including a harbor tour discussing the ecology of the Great Salt Pond; water quality testing; plankton tows; exploration of the docks and Andy’s Way; and a beach clean up and marine debris tally. Throughout the program they are encouraged to ask questions as well as create and participate in their own explorations. The teaching approach is to provide opportunities for students to figure things out rather than simply providing them with information.”

Recreational activities include the Fishing Academy, kayaking with Pond and Beyond or Ocean Adventures’ paddleboarding, visiting the bluffs and swimming at the beach.

“It is our hope that the students have a great time along with learning and, so far, that seems to be the case.” Preler said.

Ferry tickets for the students were provided free of charge by Interstate Navigation.